The 20 Most Dangerous U.S. Cities for Cyclists [+Death Totals]

Commuters looking to reduce their environmental footprint may want to think twice about safety before hopping on a bike. According to the National Highway Traffic Safety Administration, the number of cyclist deaths has been rapidly increasing over the past several years. In 2017 alone, there were 783 cyclist fatalities nationwide, a 25 percent increase since 2010. 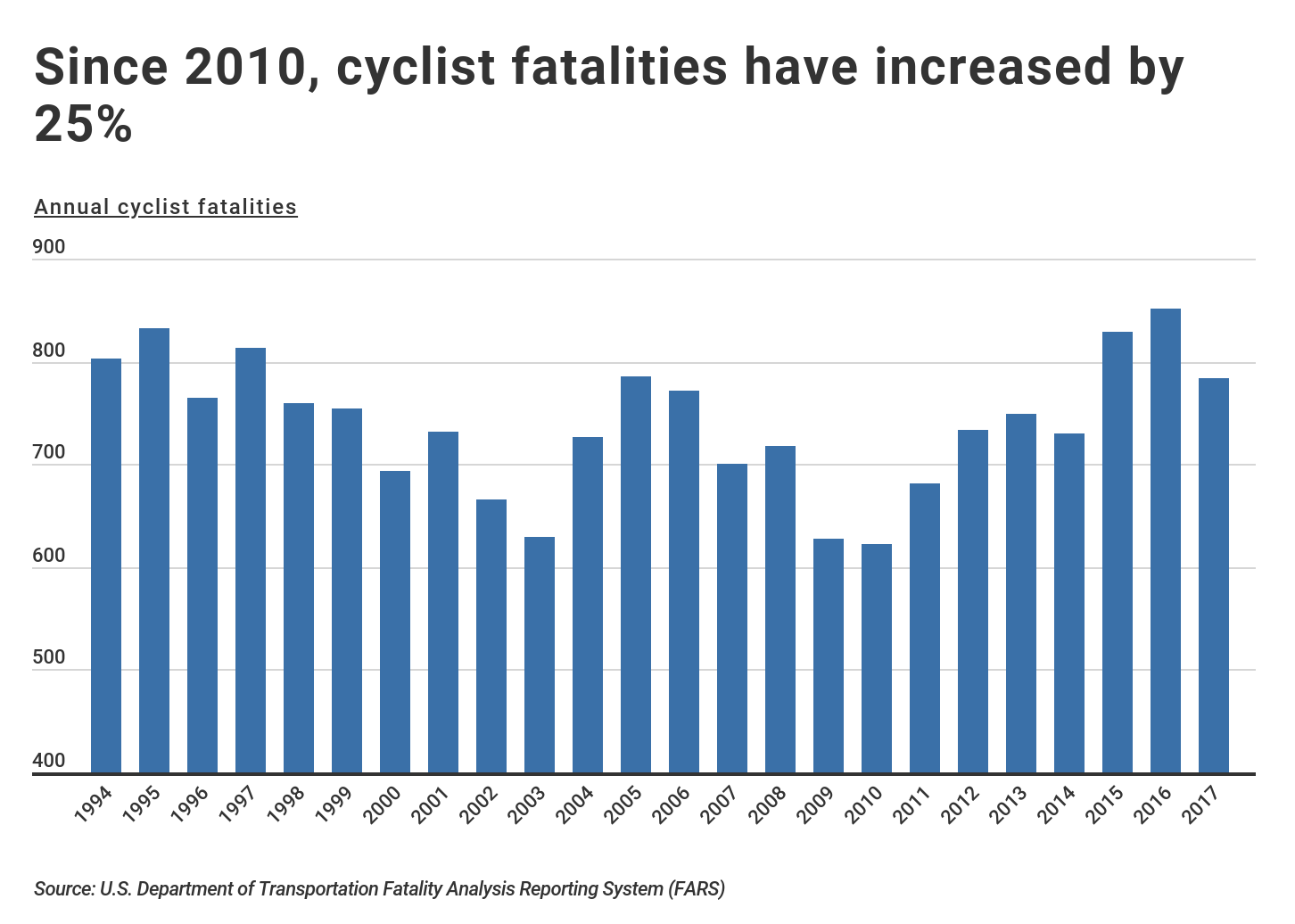 Increases in cyclist fatalities have occurred alongside increases in bike share programs and the number of cyclists commuting to work. In 2017, there were nearly 800,000 commuters nationwide who rode their bicycles to work, representing 0.5 percent of all commuters. While the share of bike commuters has remained steady in recent years, the fatality rate per 100,000 bike commuters is at a ten-year high.

Although cyclist fatalities have been on the rise nationwide, the risk varies widely by location.

Between 2014 and 2017, California, Florida, and Texas, were responsible for about 41 percent of all cyclist fatalities in the U.S., despite accounting for only 27 percent of the population.

When comparing fatality rates (per commuter or per resident), the most dangerous areas are clustered in the Southeastern U.S. Despite warmer weather, these states also report below-average rates of bike commuters—possibly the result of dangerous riding conditions. These states also are some of the worst states for fatal crashes during a time period that affects many cyclists: daylight saving time switches. With the rise of bike share programs and an increased emphasis on more environmentally friendly modes of transportation, cycling is likely to continue growing in popularity, especially in major cities. To identify which cities are most dangerous for cyclists, our researchers here at CarInsurance.org analyzed fatality data from the National Highway Traffic Safety Administration’s Fatality Analysis Reporting System for the period 2014-2017, as well as population data from the U.S. Census Bureau’s American Community Survey.

They ranked cities by the number of bike fatalities per 100,000 bike commuters. Only cities with at least one cyclist fatality per year and at least 100,000 residents were included in the analysis. Consistent with the findings at the state level, 13 of the 20 most dangerous cities for cyclists are in Florida, California, or Texas.

Keep reading to discover the full list of the most dangerous cities for biking in the United States.


Top 20 Most Dangerous Cities for Cyclists

Making smart choices behind the wheel can be both safer and cheaper. Learn driver safety tips and how to save money on gas here at CarInsurance.org.

TRENDING
Do you have to call the police after an accident? Learn about this and other driving laws and tips here at CarInsurance.org.

RELATED
Our researchers at CarInsurance.org recently published one of the internet’s most comprehensive insurance resource centers. It includes agent and broker reviews, company financial ratings, guides, regulatory information, and more.

The cities in this analysis were ranked according to the cyclist fatality rate.

Cyclist fatality rates were calculated as the average number of cyclist fatalities in the city for the period 2014-2017 per 100,000 estimated cycling commuters in 2017.

All cities included in the final list had a population of at least 100,000, as well as at least one cyclist death per year.

A closer look at the data yields additional insights into fatal cycling accidents. For example, adults over 45 are more likely to be involved in a fatal bicycling accident than younger people. More specifically, nearly 60 percent of cycling fatalities between 2014-2017 involved victims over the age of 45.

Despite rising cyclist fatality rates, there are many things that can be done at the individual level to improve cycling safety. According to NHTSA, bike helmets can reduce the risk of head injury by 85 percent.

Interestingly, only about 16 percent of cyclists involved in fatal accidents were known to be wearing helmets. For cyclists, wearing a helmet and adhering to traffic rules (such as riding in the same direction as cars) can reduce the risk of collision or fatal injury. In addition, reducing distractions such as texting can make cycling a safer mode of transportation.