The Coronavirus Pandemic has caused significant decreases in time (and money) spent on commuting to work, cleaner air, and even insurance savings.

The COVID-19 pandemic is a powerful reminder to be careful what you wish for: The traffic jams and stressful commutes that we’ve always scorned have essentially vanished overnight. Clearer skies have returned, bluer waters have surfaced, and the frustration of sitting in bumper-to-bumper commute traffic trying to drive safely feels like a thing of the past.

Unfortunately, many of the reasons behind this are far from uplifting: Millions of jobs (and thousands of lives) have been lost, and indefinite quarantines have been put in place.

To understand the impact of the pandemic across the country, we spoke to more than 1,000 licensed motorists about driving during COVID-19. These individuals, like the rest of the world, have had to cut back on driving or stop entirely.

This group was able to show us how much time and money they were saving by eliminating their commutes, how they were navigating car payments during this time, and which select addresses they were still putting into their GPS. If you’re curious (or just stuck in quarantine), you’ll want to keep scrolling.

Before COVID-19 took hold, driving claimed an enormous percentage of Americans’ time. On average, respondents spent nearly six hours every single week behind the wheel of a car. These lengthy car rides and stressful commutes were contributing substantially to many neck and back problems, as well as a horrifying number of car accidents.

During the pandemic, however, drivers were on the road for just a quick six minutes each day, on average. Another 27% of respondents had stopped driving their cars altogether. 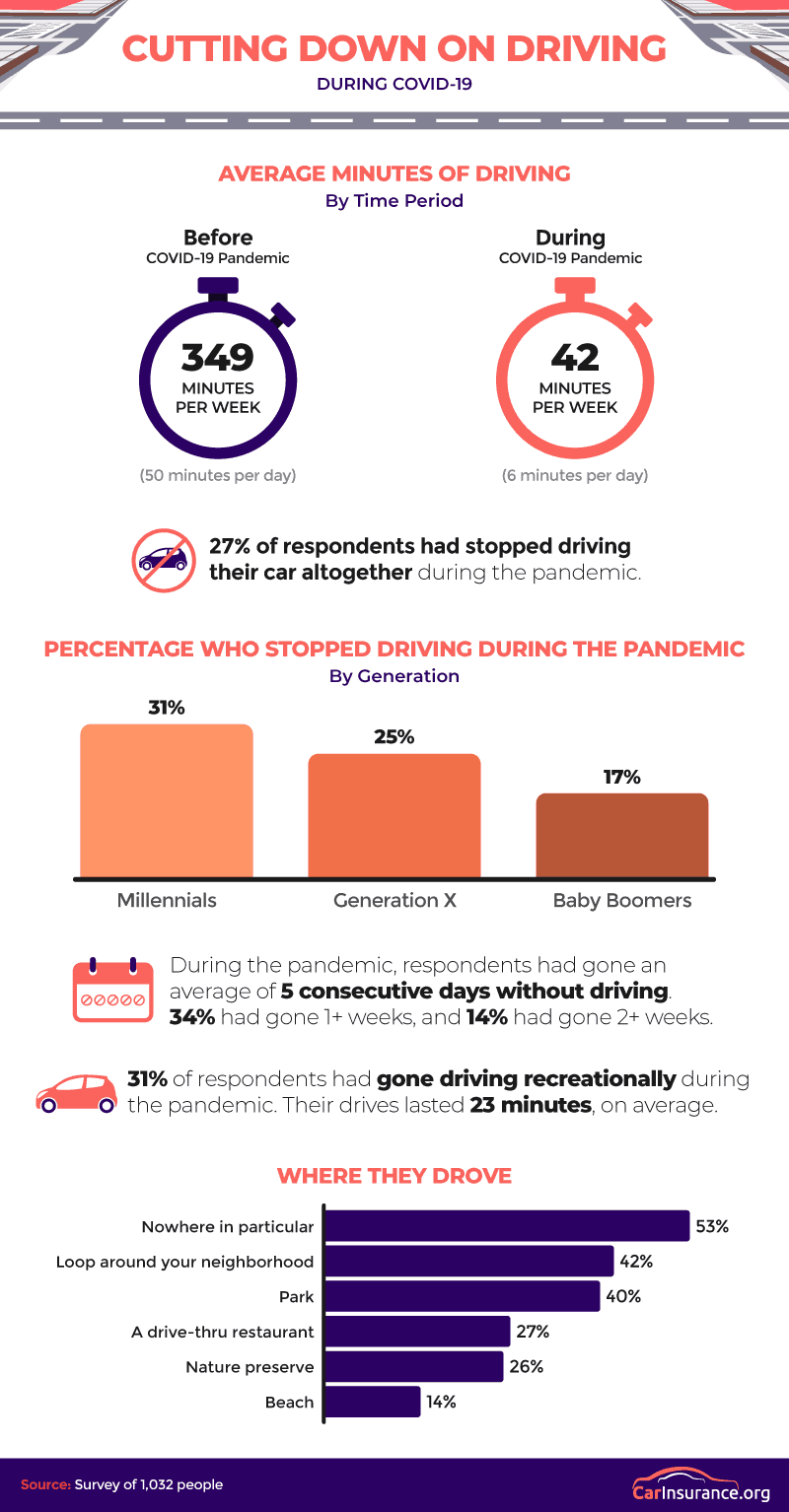 For the 73% who chose to continue driving during the pandemic from time to time, their new normal looked nothing like the past. More than half of drivers said that when they did drive, they just got in their cars and drove around aimlessly.

Forty-two percent said they took a loop around the neighborhood as part of their new normal, while 40% were still able to go to parks, despite the fact that many were closed.

One of the first places COVID-19 prevented us from driving was the office, but it also reduced the corresponding gas budget. According to the full-time employees we spoke to, their pre-COVID commutes cost them $124 in gas each month.

After COVID? Just $27. That means that the lack of a commute during COVID-19 saved people $97 a month on gas costs alone, not to mention the priceless clean air that many major cities can now breathe or the countless lives saved by the sharp decrease in car accidents.

But budgets and air quality weren’t the only two things that were saved: Time was perhaps the biggest gain of all. In terms of commuting, full-time employees saved 19.6 hours – or nearly a full 24-hour day – of time every month.

Even though this sounds positive (commutes have been shown to correlate with stress and health issues), quarantine may have us missing even this piece of normalcy more than we care to admit: A little less than half of the respondents told us that they actually missed their commutes.

Most often, they yearned for the days of listening to music in the car (57%), driving (43%), and listening to podcasts and audiobooks (33%). We’d be remiss if we didn’t mention that all of these things are still possible without an office as your destination.

People are Stalling Insurance During the COVID-19 Quarantine

Since respondents were hardly using their cars, we started to wonder whether they were still making car insurance payments.

Most respondents said they were still making payments, but 21% were considering canceling payments during the pandemic, while 4% had already done so.

If you have not already thought to do this, know that 82% of insurance companies, like Geico and Liberty Mutual, are extending refunds and credits to their policyholders during this time. Millennials, who many argue are the hardest hit financially by the coronavirus, were the most likely generation to stop or consider stopping their car insurance coverage.

Uber, one of the biggest financial success stories during the glory days, has also announced that it plans to suffer a $2.2 billion loss due to the pandemic. That said, the company has still managed to provide some crucial delivery services to those in need during the pandemic.

Still, their basic service of picking up a passenger and dropping them off at another location has come to a near-halt: Only 6% of respondents we spoke to had used a ride-hailing service at all, Uber or otherwise, during the pandemic.

Car Buying is Delayed Due to the Coronavirus Pandemic

Car buying, like car driving, also took a serious hit during the outbreak. Of the 39% of respondents who were actively planning to buy or lease a car between March and May 2020, 71% had decided to wait until later to do so.

After the pandemic ends, 29% said they would be less likely to lease or buy a car than they would have before. That said, another 24% said they were more likely. Perhaps they’ve been saving enough or maybe they’re just really looking forward to hitting the open road again. Either way, respondents said it would likely take them an average of 5.4 months from April 2020, or until October, to be ready to make their next car purchase or lease.

Getting Back to Normal After Coronavirus

Despite such turbulent economic and emotional times, the data found here was actually uplifting; the few merits of a quieter, paused life deserve some recognition. Respondents were saving hundreds of dollars, car insurance companies were offering refunds, and stressful, lengthy commutes were finally getting a rest. Even though car purchases may need to wait, drivers’ first destination after the pandemic will likely be extra appreciated.

If you’re shopping or considering new auto coverage, let our team at CarInsurance.org help you. We help consumers like you research, find, and obtain the coverage that best suits your needs. To learn more about your options and even get a customized car insurance rate by your state, check out our auto insurance services today.

We used Amazon Mechanical Turk to survey 1,032 people about their driving behaviors before and during the COVID-19 outbreak. For respondents to be included in our data, they were required to complete the entire survey, take the survey only once without multiple attempts, and pass a midsurvey attention-check question. Participants who failed to do all of these were excluded from the study. The survey ran from April 10, 2020, through April 13, 2020.

The data we are presenting rely on self-report. There can be many issues with self-reported data, such as selective memory, telescoping, attribution, and exaggeration. In finding averages of quantitative values, we removed outliers so the data were not exaggerated.

Sharing is caring, especially during a pandemic. If you know someone else in quarantine who could use a little pick-me-up, feel free to share this study. Just be sure your purposes are noncommercial and that you link back to this page so its contributors can receive credit for their work.