Skip to content
Home » How the States Rank on Uninsured Drivers

How the States Rank on Uninsured Drivers

Home » How the States Rank on Uninsured Drivers

Being involved in an accident can turn into a hassle. After an auto accident, you have property damage to deal with, and you may be dealing with medical injuries. Maybe your claims adjuster with your insurance is great. Maybe they’re terrible or you’ve been trying to reach out to the other driver’s insurance.

Being involved in an accident with a driver who doesn’t have insurance can be even worse. This could include a hit and run driver who hits your parked car or someone who stays until the police arrive, but has no insurance. Thus, we’re big on the cost-to-benefit ratio that uninsured motorist and underinsured motorist coverages provide to drivers that select them as part of their auto insurance coverage. Looking at the percentage of uninsured drivers by state can help you determine whether uninsured motorist coverage is worth it in your state. That’s why we’re looking at how the states rank on uninsured drivers.

How does uninsured motorist coverage work?

Uninsured motorist coverage offers protection against damage associated with a driver that is uninsured. While the justice system does allow one to sue in the event of an accident with an uninsured motorist, the process involved can be very lengthy. If a judgement is handed down in your favor against the uninsured driver, difficulties may persist in being able to obtain the amount awarded.

Put simply, lack of auto insurance often correlates to lack of funds. If the driver could not afford to carry minimum liability insurance, they may not only have insufficient funds with which to pay a court judgement rendered against them. They may also lack other sources of funding, such as property and possessions that could be sold to cover such a judgement. So you would have paid legal fees to have nothing to collect.

So where are your chances of being involved in an auto accident with an uninsured motorist highest? We think a good area to start is by looking at how the states rank on uninsured drivers.

Should you have your uninsured motorist coverage stacked or unstacked?

Some states demand drivers carry liability coverage and uninsured motorist coverage. Experts recommend personal injury protection and collision and comprehensive coverage. If you have uninsured and underinsured motorist coverage, you can have it stacked. This increases your auto insurance rates compared to unstacked coverage. It also effectively doubles you coverage in the event of a covered accident. Think of stacked as one limit stacked on top of the other.

If you’re looking at more coverage but concerned about the average cost, one of the best things you can do is get quotes. Compare your options and see where you can get the best price for the coverage you need.

How the States Rank on Uninsured Drivers 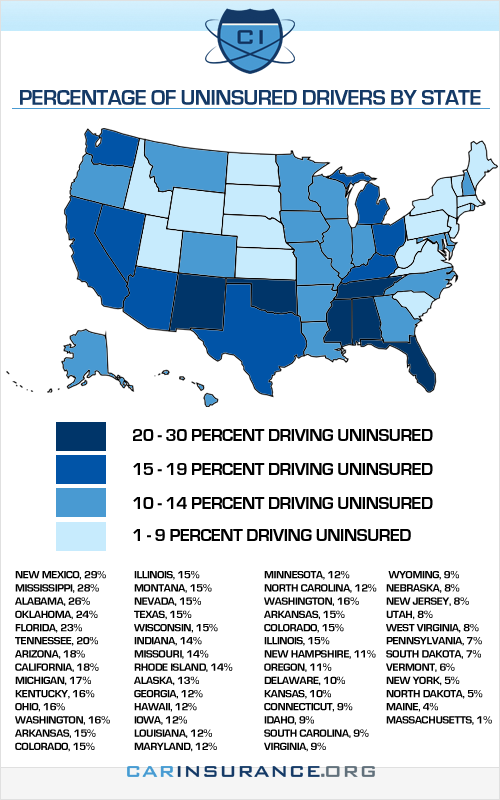 EMBED THE IMAGE ABOVE ON YOUR SITE