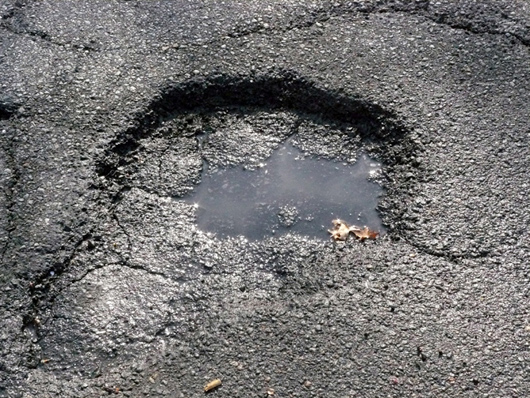 Potholes are everywhere this March. (photo by silive.com)

I took a small road trip this weekend to visit some friends. First thing I noticed about Interstate 75 were the craters dotting the pavement. There were so many littering the road I’m sure someone flying overhead could glance at the road and be greeted by the visual display of asphalt that appeared to be photoshopped – textured with the coat of a leopard, spots and all.

Despite the odd beauty one might have observed from above, the conditions were less than ideal for those driving across the broken roadway. Nothing completely unavoidable, but there were some that looked awfully deep and I was unwilling to test them for the benefit of our readers.

When I made the exit at the 104 mile marker, I was looking forward to a less-bumpy ride.  That’s not what I got, however. The roads in Lexington, Kentucky were substantially worse than the conditions I’d driven on I-75.  Winter has been especially unkind to the bluegrass state this year, with dozens of significant snowfall events this winter. And snowfall means trucks that salt and trucks that scrape, and even ones that do both.

Most folks will remember from chemistry that water is a solvent. And it is rather effective at destroying our paved surfaces. Continual freeze and thaw of water does substantial damage to roadway surfaces during the winter. Areas that don’t see freezes still experience effects, as water can literally wash a road away.

Potholes are more than minor annoyances. They can make for a bumpy ride for certain, but they can also cause major damage to an automobile – enough to file an insurance claim for in some cases.

What’s especially horrible about the influx of potholes is that they reach their peak just when the weather is turning inviting for days with a drive with the top down or even a motorcycle ride. 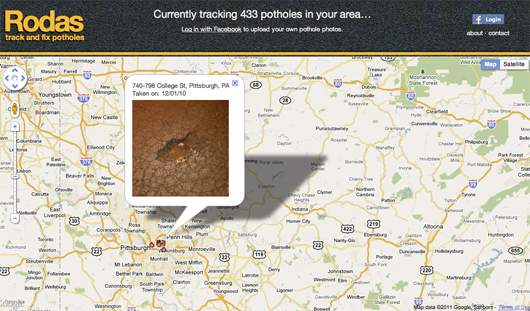 Needless to say, after the lumpy and bumpy conditions I experienced over the weekend, I was intrigued when I read about a new project being conducted by Carnegie Mellon University that utilizes GPS-equipped phones and Facebook to allow drivers to report potholes like the hundreds or thousands I had seen over the weekend.

Called the Road Damage Assessment System (RODAS), the project looks towards people just like us to photograph potholes with their Android, Blackberry, iOS or other smart phones and then upload them to Facebook. Once they’re uploaded, they are placed on a Google Map via the GPS coordinates attached to the pictures.

From that point, anyone can view the images and their exact locations right on a map. Right now, the project is just looking for contributions within the Pittsburgh, Pennsylvania area.  So it doesn’t apply to most of us – yet.

It will be interesting to see if this project, or something similar, can grow into a real solution used by drivers and acted upon by government. At the very least, it does demonstrate that problems like potholes might have a simple solution just by applying a bit of the technologies we’re using as a part of our daily lives right now.