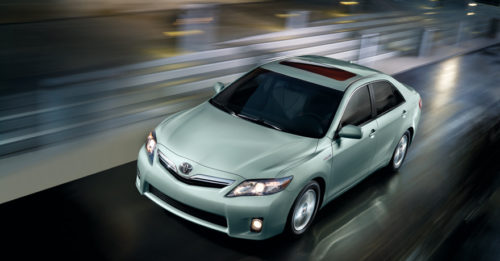 Toyota's Camry is still the top selling car in the United States. (image by Toyota.com)

Citing the continued stall on hopes for an economic recovery, industry ratings company J.D. Power has lowered its 2011 automotive projections for production and sales from 12.9 million to 12.6 million units. They say that they now expect a recovery to extend into next year.

“The selling rate in August is expected to be slightly stronger than in July, but without a significant increase in incentive levels or a reversal of the economic woes, there isn’t a compelling reason for those consumers sitting on the fence to return to dealer showrooms and purchase a vehicle,” said Jeff Schuster, executive director of global forecasting at J.D. Power and Associates. “There is little question that a strong level of pent-up demand exists, but economic and financial uncertainty is keeping it from being released.”

“The economy and automotive industry continue to wrestle with a series of unsettling developments, which are now likely too strong to overcome within 2011,” said John Humphrey, senior vice president of automotive operations at J.D. Power and Associates. “While it is not time to hit the panic button, it is clear that ascending from the recession is proving to be just as bumpy as the decline into it, and a full recovery in vehicle sales is further down the road than previously thought.”

With continuing slips in consumer confidence – August saw the lowest levels since the start of the recession – and yet another rise in applications for unemployment, it seems automakers, like the rest of us, are in for a rough ride.