How Many Distracted Drivers are Out There? 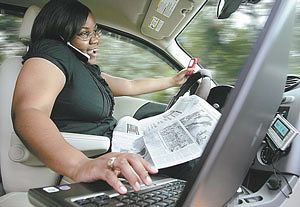 You might think you’re multitasking, but you’re really just putting yourself and others in danger. (image by streetsblog.org)

Most of us are familiar with distracted drivers. Be it the lady who’s shaving her legs as she drives down the road, a teenager who’s texting their latest Facebook status update or using Facebook on a smartphone or feature phone, or simply a pet owner who’s let their dog run wild in the confines of their car, forcing them to hold the dog in their lap, distracted drivers take all forms.

Not only have we been exposed to distracted drivers, but we also know it goes without saying that distracted driving is a serious problem for each of us. The problem is, despite all the statistical data gathered, the studies that have been and are currently being conducted – we really have no idea how many of the drivers on the road are being distracted. We know things like how many people were killed and injured, but we’ve got no clue how many near misses happen.

But, this sort of thing is estimated using mathematical models and the scientific method. Random survey data is collected and processed, which can extrapolate reasonable estimates for us. Let’s look at the cell phone equation again – here are the estimates of cell phone penetration in regards to distracted driving, again courtesy of the NHTSA and their 2009 nationwide survey on driver habits:

The National Highway Traffic Safety Administration’s survey of driver habits is the only real source we have on use of hand-held electronics. The data can be extrapolated to indicate that at any given moment, 672,000 vehicles are being driven on American roadways by a driver who is using a hand-held cell phone during daylight hours. That translates into meaning 9 percent of all vehicles are being driven by a motorist using a cell phone, nearly 1 out of every 10 cars.

Since there are so many drivers who are distracted by cell phones or other handheld devices, and since these types of drivers only account for 18 percent of all distracted driving deaths, it may seem like a simple matter to simply multiply the numbers from cell phones in regards to total fatal or injury crashes to come up with a total number of distracted drivers, but it’s not that easy, if we want to adhere to sound scientific principles. We’ve got observational data to correlate with cell phone usage, but no such data on doing things such as eating or being involved in a heated argument with a passenger. But we do know that 82 percent of all distracted driving fatal crashes don’t involve a cell phone, so we don’t think it is out of the question to consider the number of potential distracted drivers a large one. Seven figures large, easily.