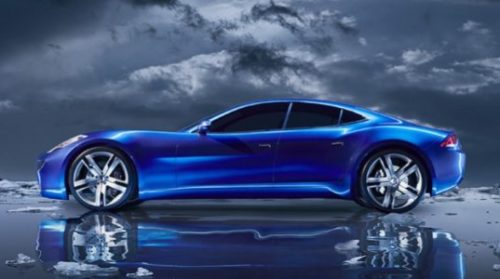 There’s no doubt the Fisker Karma is a gorgeous car. And as an extended-range electric vehicle (EV), it offers spirited performance (400+ horsepower) while providing the equivalent of 100 miles per gallon.

It employs a powertrain similar to that in the Chevrolet Volt, meaning that although there’s an electric motor, it can also operate on gasoline. Once the range of electrical power has been exhausted, a driver can then switch over to a gasoline engine to keep on going, meaning worries about becoming stranded aren’t exactly worries at all.

While electric vehicles are still searching for a mass market with typical consumers, those with money and fame, including Leonardo DiCaprio, Al Gore and Colin Powell have lined up to preorder the American-designed EV.

Fisker has proven so popular, that they were given loan guarantees of $529 million dollars from the Obama administration. Vice President Biden said during the unveiling of the loan that Fisker was “a bright new path to thousands of American manufacturing jobs.”

And we wish we could agree with that statement, and certainly would be more inclined to do so, had Fisker set up manufacturing in the shuttered General Motors factory in Delaware they initially pegged to produce the car.

Instead, Fisker has moved to offshore and outsource production of their automobiles to Finland, employing 500 Finnish workers to produce their cars.  Half a billion in federal loans, yet manufacturing jobs benefit a European country.

And for their part, the company claims none of the federal loan money has been used for any of their European manufacturing operations, and that the feds gladly signed off on the plan to manufacture the car in Europe rather than the U.S., as long as the loan money was kept stateside.

So just what is the company using those federal funds for?