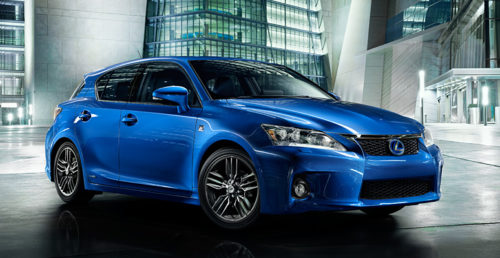 While the brand placed second overall, the Lexus CT was the most reliable car. (lexus)

A near-sweep by the Japanese. Domestic automakers falling hard. A stunner for Porsche. Each elements that were contained within the results of the Consumer Reports 2011 reliability survey.

The survey results were dominated by the Japanese, who took the first nine spots of the top ten performers. Of the 91 models by Japanese automakers for which responses were sufficient to rate the cars’ reliability, 96 percent of them got a rating of Average or Much Better than Average.

Toyota notches three of the spots, with the Scion brand being named the most reliable, and luxury marquee Lexus coming in second. Toyota itself was ranked sixth overall.

For those who are fans of American automakers, the news was generally bad. The “winner” of being named the top performing domestic brand was Jeep. That’s an impressive sounding seven point upwards slide for the brand, but in reality, that just means that Jeep models can be expected to deliver the middling level of “average” reliability.

Of all domestics, the news to Ford was likely the bitterest pill to swallow. After having placed in the top ten in last year’s results, the brand dropped a full ten spots to number 20. Much of the blame for Ford’s plunge is the MyTouch in-car communications system. Owners and pundits have pointed out the system is flawed because it serves as a distraction since drivers must select items on the touchscreen.

General Motors had an average performance, but that’s not exactly what was expected after they had improved so much the year before. Chevy held steady at seventeenth in the rankings, although Cadillac is now near the bottom at twenty-fifth.

Consumer Reports didn’t mince words. “Even with Chrysler’s improvement, Detroit models still have reliability problems. Of the 97 domestic models and versions for which Consumer Reports has sufficient data, 62 (64 percent) rated average or better in CR’s new-car reliability ratings, leaving 35 as below average,” they said.

But as bleak as things may seem for domestic brands, it’s hard to wrap one’s head around the fall demonstrated by Porsche. Ranked second the year before, the German luxury brand fell a whopping twenty-five spots and now ranks as the second to bottom at number twenty-seven. Consumer Reports chalked it up to a disastrous launch of the new Cayenne and a lack of sales.

After the break, check out how the top ten lined up. We’re still stunned by the streak of success demonstrated by the Japanese brands, which take the first nine spots. You can also check out more on the magazine’s website.