Cars that detect when a driver is drunk. A Solution to DUIs? 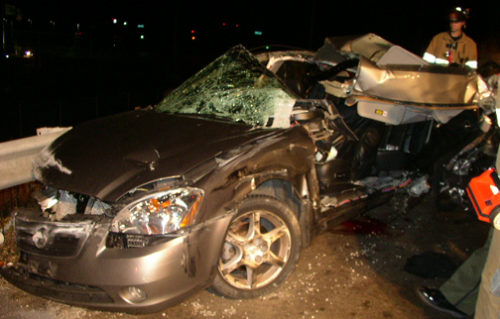 If cars were made to keep drunks from operating them, would scenes like this become uncommon? (image by car-accidents.com)

Of all the things one can do behind the wheel of a car, driving under the influence of alcohol is one of the worst. We maintain that if you’re drinking, you shouldn’t be driving.

We say that with good reason. Driving under the influence was responsible for almost one-third of fatal crashes in the United States in 2010, according to the National Highway Trafic Safety Administration (NHTSA). These crashes cost not only the loss of life, but they also account for more than $114 billion in purely economic losses.

And while those are two very good reasons not to drive under the influence of alcohol, they’re far from the only ones. If you’re caught driving under the influence, you could be facing many hardships, despite staying alive. Loss of your drivers license, huge fines, court and attorney costs, impound fees, time in jail and even not being able to purchase car insurance can be the best of outcomes that await you.

Even if you are able to keep your license and still drive, you might be forced to pay much higher rates for simple liability insurance. At minimum, you can expect an increase of at least 20 percent to 40 percent on the cost of your auto premiums. Nothing good comes from drunk driving.

More sobering statistics from the NHTSA: impaired drivers also tend to have other high-risk behaviors. Drivers with BACs of .08 or higher in fatal crashes are 8 times more likely to have previous DWI convictions than other drivers. And in 2006, there was a DUI arrest for one out of every 138 licensed drivers in the United States.

An ad hoc grouping of car insurance companies, alcohol distributors, the NHTSA and safety advocates is suggesting that lawmakers should fund research and legislation that they claim could stop driving under the influence before it happens.

“Drunk driving continues to be a national tragedy that needlessly claims the lives of thousands of people on our highways each year,” said U.S. Transportation Secretary LaHood. “We need to put an end to it.”

The system, called “Driver Alcohol Detection System for Safety” (DADSS), is bring jointly developed by the NHTSA and researchers in the automotive industry. The goal of the program is to develop and deploy technology that would be offered as optional or standard equipment in all new cars to gauge a driver’s blood alcohol concentration (BAC).

While these types of ignition interlocks have been required by court order for DUI offenders for more than 20 years, the ultimate goal of DADSS is to include these kinds of devices in every new car sold in the United States. In 2010, 212,000 drivers were required to have interlock devices installed in their car, and fourteen states have now passed laws that require interlocks for all DUI offenders, even first time offenders.

Traditional alcohol interlock devices are easily fooled, however. A drunk driver may simply have a passenger breathe into the device to allow the car to be started. DADSS interlocks wouldn’t be quite as easy to fool. These devices would measure a driver’s BAC through sensors that are included on a steering wheel, the ignition button, or that simply monitor a driver’s breath or eye movements to identify if they’ve had too much to drink.

According to the NHTSA, the results of DADSS research thus far has been encouraging, but actual deployment of the technologies would not come for another decade, at the earliest. They say that for DADSS to be successful, the technology will need to be non-invasive to the user; extremely accurate, precise, repeatable, reliable, durable and relatively inexpensive.