MINI Countryman Not So Mini 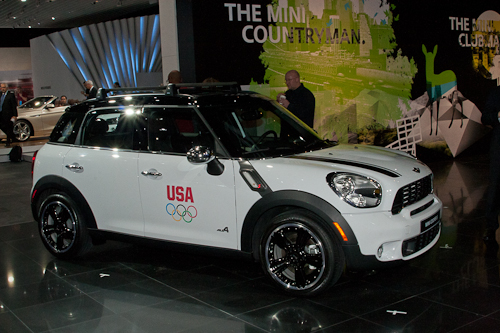 A four door MINI? Some purists may scoff at the idea, but they forget that one of the neatest things about the original MINI was the variety of models that were available. From basic and cheap to fast and furious, you could even buy a shooting brake or a pickup truck. But a four door? Never!

The 2012 MINI Countryman is longer and taller than any other MINI and indeed comes with four doors. Also available is all-wheel drive, with a bit of actual off-road capability. In fact, a highly modified MINI Countryman will contest the World Rally Championship later this year. The potential is there for a seriously fun and fast four-door that looks unlike anything else on the road!

In North America, the Countryman is available now with a number of engine choices and 2- or all-wheel drive.

More photos and MINI press release after the break.

MINI Countryman: Fun has no limits.

The MINI Countryman takes the hallmark driving fun of the brand into a new dimension. This is the first MINI to come with four doors and a large tailgate as well as a versatile interior offering space for up to five people. The MINI Countryman is the first member of the MINI family with a body measuring more than four metres (157″) in length and which can be ordered as an option with all-wheel drive. With these features, in addition to the Countryman’s raised seating position and optimised ride comfort, the world’s only premium vehicle of its kind crosses the boundaries of urban mobility to take the trademark MINI feeling into new dimensions and win over additional target groups. Optional MINI ALL4 all-wheel drive allows the driving fun you expect from the brand to be experienced off the beaten track as well. The ALL4 system is available for the MINI Cooper S Countryman and MINI Cooper D Countryman. The selection of petrol variants ranges from the MINI One Countryman developing 72 kW/98 hp and MINI Cooper Countryman (90 kW/122 hp) to the 135 kW/184 hp MINI Cooper S Countryman, whose 1.6-litre four-cylinder engine is the most efficient unit in its displacement class. The petrol models are joined in the line-up by the diesel-powered MINI One D Countryman (66 kW/90 hp) and MINI Cooper D Countryman (82 kW/112 hp). All variants of the MINI Countryman meet the EU5 exhaust gas standard in Europe and the ULEV II standard in the USA.


Are you looking for free insurance quotes?